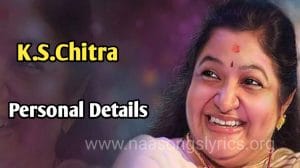 Chitra is an Indian playback singer and Carnatic musician from kerela. She is the first lady of India who has honoured by the President of India. She sings Indian Classical, Devotional and popular music. She has recorded more than 25000 songs in several languages like Malayalam, Telugu, Tamil, Kannada, Hindi, Bengali, Oriya, Punjabi, Gujarati, Tulu, Rajasthani, Urdu, Sanskrit and Badaga. She sung in foreign languages like Malay, Latin, Arabic, Sinhalese, English and French.

K.S.Chitra is the only female who received different state awards in India. She born in a musicians family in Thiruvananthapuram, Kerala. Her first guru is her father Krishna Nair. When she at very small age, she sang a song at her sister’s 21 days function, then her father decided that to teach her music.

From 1978 -1984, she earned National Talent Search Scholarship by the Central Government. She married Vijay Shankar and she had a child, Nandana. But unfortunately, her child died at the age of 8 years. It took her several days to recover from that incident. She founded an orphanage with her child name and running it.