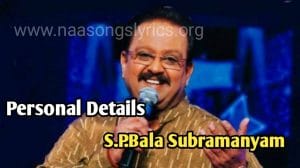 S.P. Bala Subramanyam was born in Nellore in a Telugu Brahmin family. His father S.P. Sambamurthy, who is a Harikantha artist. His mother Sakunthalamma. He had 2 brothers and 5 sisters.

Bala Subramanyam has interest in music at an early age. Firstly, he joined in JNTU College of Engineering Ananthapur with an intention to become an Engineer but he discontinued his studies due to some reasons and later joined in an associate member in the institutions of Engineers, Chennai.